FAMILY OWNED AND OPERATED SINCE 1958 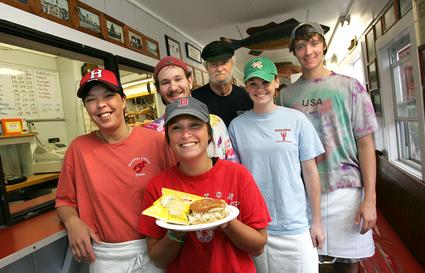 On a hot summer day, as the traffic backs up on Route 3A toward Nantasket, the whiff of fried seafood is the first sign that you’re nearing the Hingham Lobster Pound.

The second sign: groups of people clustered around the trunks of their cars, munching off paper plates and drinking in summertime bliss.

The food is the star of the show at this no-frills take-out joint. Those enjoying the food are young and old, and come from near and far, many making a table out of the back of their cars because they can’t wait to get home to eat.

“I didn’t know they were still open, but this is phenomenal!” said Grace Sutte, a Florida resident who remembers the fried clams from childhood and recently stopped by the Pound while on vacation.

Our readers are also fans of the Hingham Lobster Pound, voting it the number one place on the South Shore to get a lobster roll.

Owner Jack Daily said the key is fresh-from-the-traps lobster that is cooked the night before and picked for the salad on the morning it is served.

There is very little mayo in this sandwich – just enough to keep it moist. Instead of a hot dog roll, they use a Pepperidge farm hamburger roll. You can order a 1/4-pound lobster roll for $11.99 or a 1/3-pound lobster sandwich for $15.99.

Sales of the lobster roll doubled this year, Daily said. Customers are urged to come earlier in the day or place their order ahead, particularly on Sundays when the place is busy. Daily only orders the number of lobsters he thinks he’ll sell in a day, and, he says, “I’d rather guess short, because I hate to throw out a very good lobster.”

Janet and Richard Potts of Milton recently enjoyed two lobster rolls at their car, agreeing with readers on the joint’s ranking in the Ledger poll.

Jennifer Mann may be reached at [email protected].